Jump to: Types of PhonesBest Landline Phones for Seniors

When my mother told me that a younger friend of hers had started to experience hearing loss, it was obvious she felt a little smug about it. Even at 78 she couldn’t resist competing with her friends over who would age better.

Well, only a year had passed before she was complaining about having trouble hearing my brother and I over the phone.

Anyway, to put an end to the warmhearted yelling matches that every phone call inevitably turned into, I decided to upgrade her landline. (And no, she wasn’t using a rotary at the time.)

As with pretty much everything I purchase, my incessant need to find the “best” product had me crawling through website after website, review after review.

Below is what I narrowed my choice down to. And if for whatever reason you feel inclined to take my word for it, here’s the phone I went with.

My mother has been calling me daily ever since… 😐

There’s two things you’ll need to consider when purchasing a phone for someone who has a few years on you – hearing and vision. The type of phone you choose will depend on whether they have difficulty with one (or both) of these senses.

Alright, I don’t know if that’s actually what they’re called, but it paints the right picture.

A jumbo phone looks like a Fisher-Price toy for adults. The dial pad is made up of over-sized buttons that make them easier to see and press. Consequently, they’re well suited for those with poor vision—and sausage fingers, apparently.

If you or your loved one is hard of hearing, an amplified phone will make a huge difference in the quality of your phone conversations.

As the name suggests, an amplified phone allows you to increase the volume beyond that of a conventional phone. This, of course, makes it easier to hear the person on the other end. They also typically have a louder ringtone to ensure the owner hears the call in the first place.

While landline phones are slowly falling to the wayside of the ever-so-popular smartphone, you can always count on your elderly parents to keep the tradition alive. However, there have been some changes to its design in the past few decades (as if you hadn’t noticed…)—most notably the switch from corded to wireless. This is obviously ignoring the fact that at one point you had to spin a wheel to dial a number.

Deciding between a corded or cordless phone depends on the circumstances. If your elderly parents or grandparents use a wheelchair to get around, going cordless will likely be easier for them. Maneuvering their way to a corded phone can be troublesome. However, if they’re still mobile but tend to stay seated while chatting, a corded phone will work just fine.

One thing to note about cordless phones, which probably goes without saying, but I’ll say it anyway: they need to be charged! If your parents are already prone to forgetting to hang up the phone when they’re done talking, it might not be long before they come to you complaining that their phone no longer works. Easily fixed, but just something to keep in mind.

There’s a few other features that can make a landline phone easier to operate for seniors. Speed dial is a big one. Gone are the days when you had to bust out your personal phone book to find the number of the person you wanted to get a hold of. To be honest, I can’t even recite my husband’s cell number. With speed dial, your parents will only need to press a single button. There are even phones that allow for photos to be placed over top of the programmable buttons, making contacts easier to identify. This can be particularly useful for those dealing with the onset of dementia.

Caller-ID is another great addition. While you’ll still need to ensure their phone plan is setup for it, caller-ID will give your parents advanced notice of whose calling. Some phones will even verbally state the name of the caller, leaving little to no chance of confusion. Even so, if they’re anything like my Mom, they’ll still act surprised when they hear your voice on the other end.

While there are a few companies that specializes in this sorta thing, I made sure to diversify my selection as much as possible. Here’s what I eventually narrowed my choice down to: 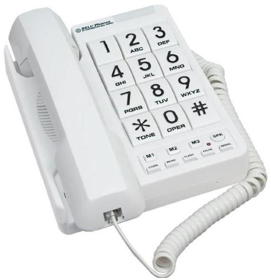 I’d like to think that I’m a responsible shopper. As such, one of the first steps I take before purchasing something online is try to get a feel for how much money I should be spending. I start off by looking for the lowest and highest priced options within a category and fill in the gaps from there.

This initial search led me to a phone by Northwestern Bell. While there are a few other landline phones for seniors around this price point, this phone is slightly better designed.

As an entry-level, low-cost phone, the MB2060 is a great option for those with mild hearing or vision loss. Its buttons aren’t quite as large as the other phones reviewed here (1” x 0.5”), but they’re certainly big enough to see. Unfortunately, the included speed-dail buttons are substantially smaller, which some may have a difficult time seeing.

Volume control is basic—just a low and high setting—with just enough amplification to make it suitable for seniors. What makes up for this is the fact that its hearing aid compatible. This essentially means that if the listener is wearing a hearing aid, they can turn it up without experiencing feedback or whistling. It also helps to reduce background noise, making it a lot easier to hear the person on the other end of the call. A speakerphone is also included for hands-free calling.

Overall, if you’re looking for a basic phone that meets the needs of your elderly parents, the MB2060 is a great choice. 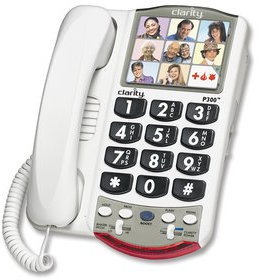 Clarity has a number of landline phones currently on the market, all specifically geared towards seniors. Their P300 Amplified Phone comes with large, high-contrast buttons, ticking off the first box for those with impaired vision.

It also features programmable speed-dial buttons with picture-overlay – a big plus for those with mild cognitive impairment. One thing to note is that you’ll need to purchase a 9V battery if you intend to unplug the unit. While easy to setup, the numbers will be lost if the phone is unplugged without backup power.

There have been some complaints of static, but it doesn’t seem to be a prevailing issue. Those that have experienced static found that it was the result of a faulty cord, which you can purchase for only a few bucks. 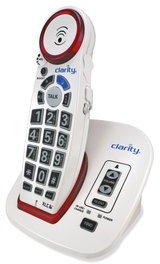 This phone is one of the few that I found that is both cordless AND has large buttons. Pretty much every other cordless phone I researched had a small keypad – not ideal for someone with diminishing eyesight.

Each number on the keypad is spoken out loud when pressed, making it even easier for those with poor vision to dial a number. However, this only partially makes up for the fact that the phone only has one speed-dial button. Given the fact that the XLC2 is cordless and the numbered buttons take up quite a bit of room, there isn’t enough space for multiple speed-dial options. Technically you can program up to 9 phone numbers using the memory button in conjunction with the numbered buttons, but it can be confusing to operate.

The last feature I want to call attention to—simply because I find it cool—is the “Clarity Logic” button. Pressing this will connect you to Clarity tech support, should you have any issues with your phone. I suspect they get quite a few unintentional calls from their older customer base. 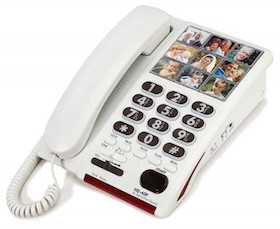 At the time of this review, the Serene HD-40P is a #1 best seller on Amazon. And to be honest, Serene deserves it. This phone provides you with all the features you need, without breaking the bank.

Serene claims the HD-40P has the most powerful amplification on the market. While it certainly is loud (26+dB), Geemarcs’ AmpliPOWER60 phone is actually the true holder of this title. That being said, it’s more than loud enough for someone with moderate hearing loss, and retains clarity even at high volume.

The HD-40P features 9 speed-dial buttons with photo-overlay and a very large speakerphone button. Speakerphone hasn’t been something I’ve discussed in too much detail, but it’s a very useful feature – especially for a corded phone. Having the option to talk hands-free ensures less muscle fatigue and allows the caller to move about freely. Both are great for elderly individuals. 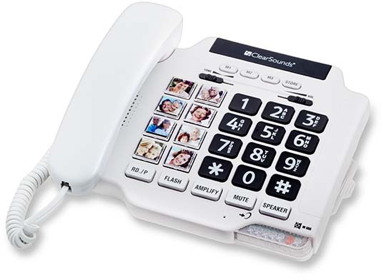 The ClearSounds CSC500 was the phone I ended up purchasing for my mother. It’s priced similarly to its Serene counterpart and has all of the same features: photo memory buttons, speakerphone, hearing aid compatibility, etc.

Other than the fact that it can amplify sound up to 40dB—almost twice that of the HD-40P—this phone is just more of a polished product overall. Its ancillary buttons (mute, redial, amplify) are all large and easy to read. It has 4 standard speed-dial buttons in addition to the 8 photo-overlay ones. Even the phone itself is more ergonomically designed, making it easier to hold.

Like the HD-40P, the CSC500 comes with a bright flashing call indicator, making it pretty difficult to miss when someone is calling.

And I won’t lie, the photo-overly buttons used for speed-dial did sway my opinion a bit, but only after I was convinced this was the best option for my mother. Unfortunately I didn’t even get to paste my face onto one of the buttons, as she insisted on printed names instead. How boring. 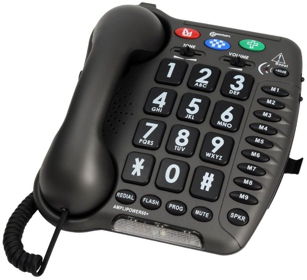 The Geemarc rounds off my list. First off, let me say that this phone is loud. Boasting sound amplification of up to 60dB, it has more than enough power to satisfy the needs of those with severe hearing loss.

The Geemarc has all the bells and whistles of the last two reviewed phones, except for the photo-overlay buttons. It does have 9 one-touch speed-dial buttons, but having to remember which one is which can be a bit of an issue.

Like the CSC500, this phone is ergonomically designed. For some reason, modern phone manufactures seem to have forgotten how to make a phone that fits nicely in your hand. Instead of a rounded edge that your fingers can easily wrap around, most insist on making their products square. Not Geemarc. This phone resembles phones of days past – one that you can grab firmly. This makes it much easier for seniors to talk for extended periods of time.